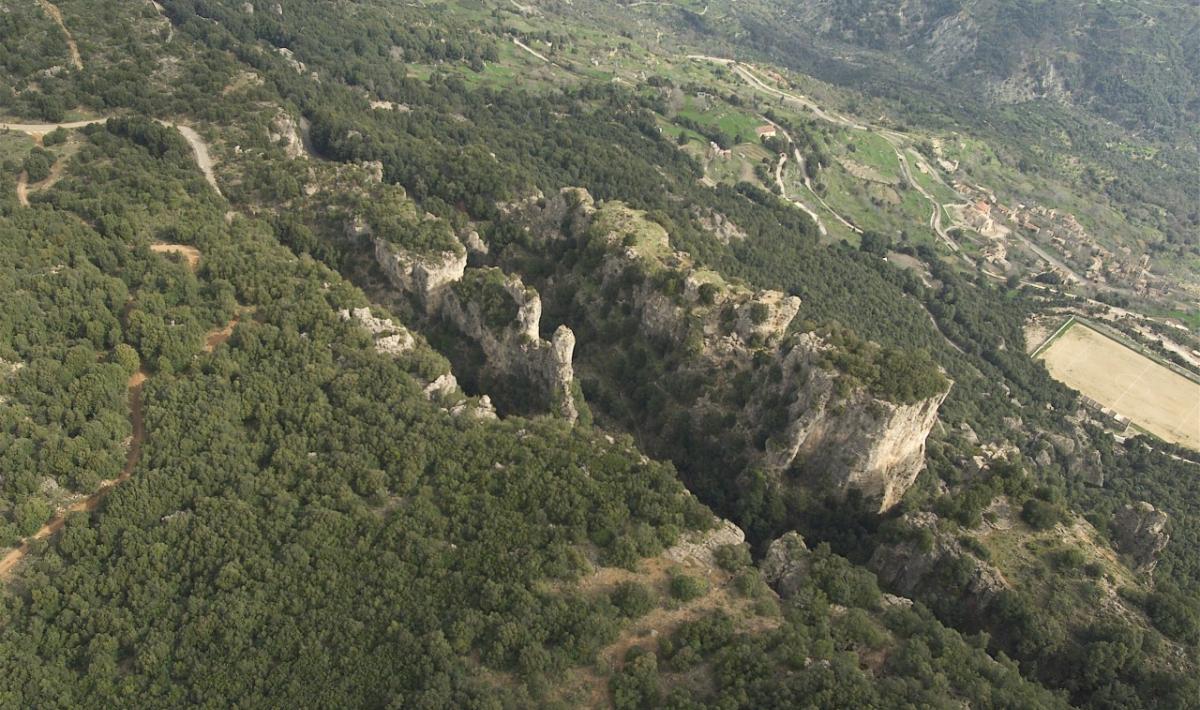 An extraordinary natural monument in eastern Sardinia, surrounded by legend, appears in between the rocks of the Taccu of Osini, deep in the province of Ogliastra
© OpenStreetMap contributors

“While traveling he came to a mountain where there was a road that could have been shorter and straighter when passing through” The Legenda sanctissimi Georgii presulis suellinsis, a hagiographic document of 1117 on the life of San Giorgio, the first bishop of the diocese of Barbaria, tells us that, during a pastoral visit to Osini, he reached the foot of an inaccessible mountain. Tired from his journey and thinking about the hardships of the wayfarers, the Saint prayed that a passage would open up to make the journey shorter and easier. Nearby, he also caused the spring of s'abba de sa santidade (water of holiness) to appear – now a destination for pilgrimages – to further alleviate the fatigue of the wayfarers. In the 14th century, in honour of the ‘miracle’, the inhabitants of Osini named a small church at the foot of the mountain after him. Thus, according to legend, the Scala (Staircase) di San Giorgio was created, also known as the Gola (Canyon) or the Arco (Arch) of San Giorgio, recognised as a natural monument in 1994. It is located 900 metres above sea level along the rock faces that delimit, to the east, the large limestone-dolomitic taccu of Osini which overlooks the village that ‘lived’ twice. Skala indicates a steep and bumpy passage across the ridge of an elevation, in this specific case a six kilometre-long pass connecting the valleys of the Pardu rivulet, to the northeast, and the Flumineddu rivulet, to the southwest. The narrow canyon, created from a fracture on the edge of the plateau and delimited by 50-metre high looming rock faces, has a unique detail: it is crossed by a strip of asphalt beginning in the village, making it easy to visit. The whole place features perfectly vertical walls, magnificent fractures and incisions in the rocks. The most impressive is sa Brecca ‘e Usala, that vertically crosses the canyon and is almost one hundred metres deep. Going back up along the walls of sa skala, which are close to each other, at the end of the asphalt strip, a little trail interspersed with steps will allow you to reach the peak of the taccu of Osini an isolated environment covered in holm oaks. The highest point (almost a thousand metres) is s’Assa de su Casteddu (castle wall), a place name that led to speculation about the existence of a medieval fortress here. In reality, it is more likely that there was once a Roman-Byzantine military post here, as is confirmed by the discovery of coins and pottery from that period. From up there, the view is awe-inspiring: it dominates the whole of the Ogliastra region, as far as the sea, including the uninhabited houses of the ‘historical old town of Osini’, abandoned after the floods in 1951. The new town emerged higher up and is embellished with works of art by Maria Lai, Costantino Nivola and Pinuccio Sciola. After crossing the pass, you will be taken to the valle di Taccu nature and archaeological park. The most majestic proto-historic heritage is the nuraghe Serbissi, consisting of a central tower and three corner towers. Other nuraghi placed to guard the area have similar architectural features. In the heart of the Valley, you will find the ‘twin’' nuraghe Orruttu and Sanu; an nearby, the remains of a Tomb. of Giants. Near the ‘scala’, but in the territory of Ulassai, there is another natural monument: the spectacular su Marmuri cave.

You will be stunned by this magnificent expression of the force of nature and then you will be eager to climb it and reach the top, where you can enjoy another amazing sight