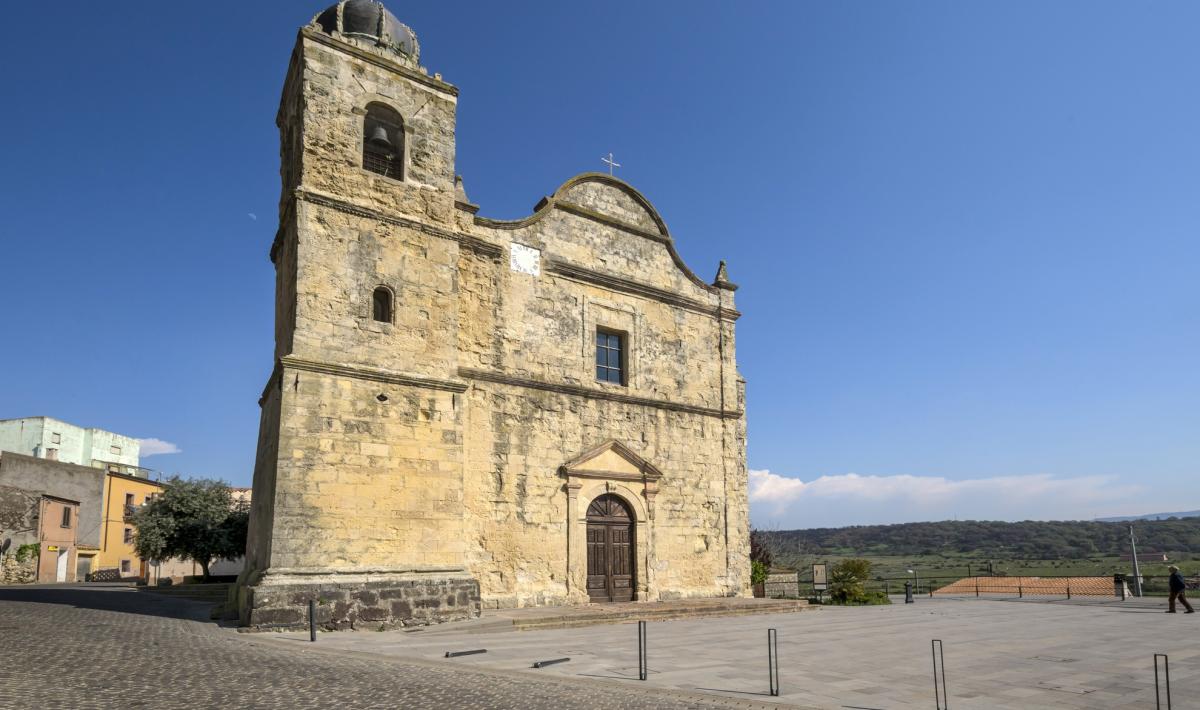 A small village in the subregion of Planargia in central-western Sardinia, at twelve kilometres from Bosa and 55 from Oristano, Sagama is the guardian of an architectural ‘jewel’ and Nuragic heritage
© OpenStreetMap contributors

It extends over a limestone hill overlooking the Badd’e Sagama valley dotted with colourful vegetation that contrasts with the dark basaltic stone. Sagama is an agropastoral village of 200 inhabitants in Planargia and an autonomous municipality since 1946, built within a fertile and lush area covered with woods and vineyards and peppered with springs. It is a destination for many mushroom hunters during the autumn. The town is located around the ‘treasure of Sagama’, the parish church of San Michele Arcangelo, built in 1604 based on the ‘mannerist’ model of San Giacomo di Sassari. The single-nave hall is barrel vaulted. The façade is set on three orders marked by cornices, to which a curvilinear tympanum has been added. On the left side is a three-level bell tower that is topped with a small onion dome, added at a later date. Inside the church is a precious wooden statue of the saint, 18th-century paintings, a 17th-century pulpit and wooden altars. The patron saint, to whom a small town church is also dedicated, is celebrated on 24th March and at the end of October. Also to be visited are the churches of Santa Croce, in whose piazza the Fuochi di Sant’Antonio Abate are lit, and the Vergine del Carmelo is celebrated in mid-July.

An abundance of water and rich soil have attracted settlements since prehistoric times, particularly in the Nuragic age. In the 19th century, the Sardinian historian Giovanni Spano counted a crown of nine Nuraghe structures around the town. Today, we can see the Funtanedda in the Badde Sagama valley, with a polygonal layout, the round Molineddu with single tower, near the Protonuraghe of the same name, the Pascialzos, the remains of the Nuratolu and the single-tower Muristene inside the town by the parish church, a prehistoric settlement from which the village originated. Examples of funerary architecture can also be found: the Tomb of Giants Su Crasti Covaccadu, in the locality of Terra d’Onore, and the tombs of Triganino Sa Costa-Triganinu and Fakkiganu. The era prior is depicted by an alleè couverte, on the border with Tinnura and a menhir that can be spied in Mura Pianu, known as Sa Pedra Marmurada. According to oral testimony, there were also Domus de Janas in the territory of Sagamese. From the Roman era, when the town was equipped with walls, of which you will notice the remains, are the burials in the locality of Murenda, as well as artefacts such as roof tiles, bronze fragments and coins dating back to the empire of Marcus Aurelius.

To be discovered is a village of prehistoric origin, arising in a valley occupied by a Nuraghe structure, then inhabited in the Punic-Roman period, with a striking religious building at its heart