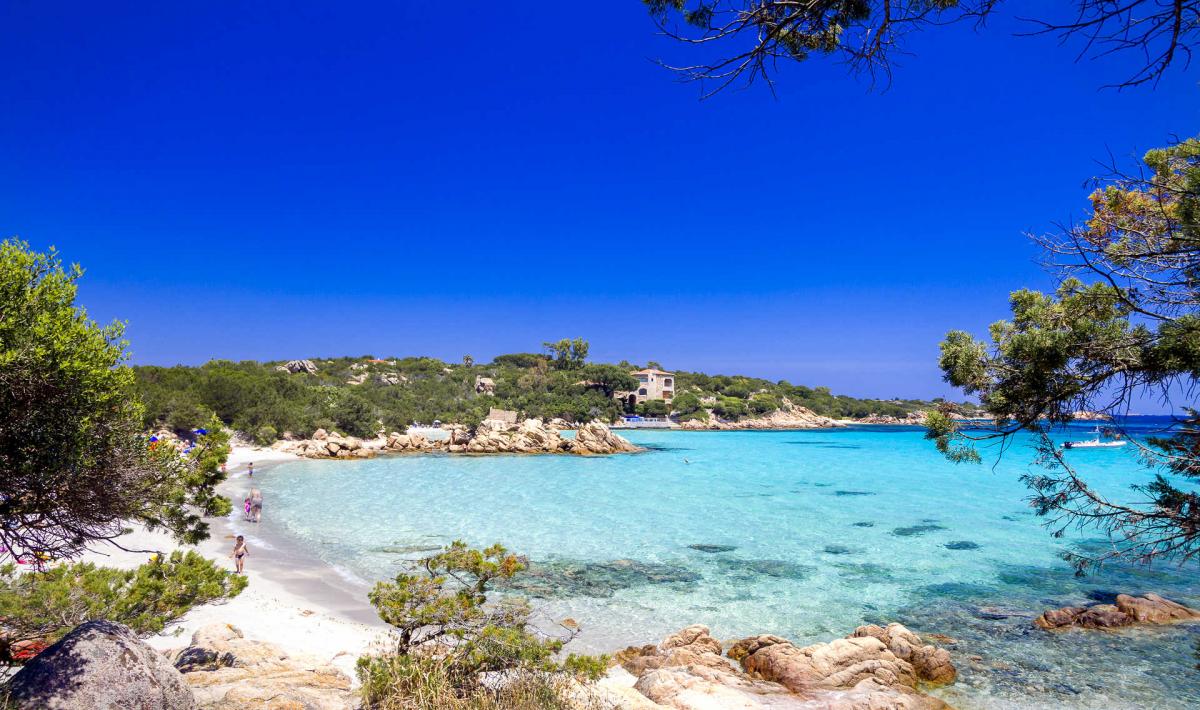 This is the town in the Gallura region around which the Costa Smeralda emerged, in the northeastern part of the Island, a symbol of luxury, high society and elite tourism in Sardinia
© OpenStreetMap contributors

Breathtaking landscapes, beaches of incomparable beauty, hills covered with vineyards and archaeological treasures. A vast and unique territory characterizes Arzachena, a small town in the Gallura region, 25 km from Olbia, with a population of 14 thousand residents in the wintertime. There are the same number of beds at the hotels in a locality in constant demographic and economic growth and famous for the Costa Smeralda, a symbol of elite tourism that emerged in the 1960s. Things that contribute to its marine prosperity are granite mining, a distinctive feature of the architecture in the old town centre, and famous wineries producing Gallura’s Vermentino wine. Until the 17th century, the little residential area of Arzachena was just a small group of little houses located around the church of Santa Maria. Today, it is a triumph of colours: little squares and facades of pink granite and white stone, flower-filled views and green spaces dotted with boutiques, delights and artisan products. Around the little town, there are the typical stazzi, rural settlements converted into B&Bs and agritourism facilities, as well as numerous districts in a ‘young’ Municipality established in 1922. The largest ones are Abbiadori, Baja Sardinia, Cannigione, once a fishing village and now a tourist village, and Poltu Quatu, a modern marina in a ‘fiord-like’ cove. Then there is Porto Cervo, an architectural 'gem' that blends with the landscape and the most exclusive holiday location in Sardinia, brimming with yachts and celebrities in the summer, as well as aperitifs and elegant evenings, scintillating nightlife, luxury hotels and villas, glamorous restaurants and clubs, sailing and golfing events. All around, there is wild scenery, like Capo Ferro, and countless Costa Smeralda beaches. Cala Granu stands out, as does the ‘crescent-shaped’ expanse of soft white sand of Grande Pevero. Behind it, there are the well-kept greens of the Pevero Golf Club and opposite, there are the islands of Li Nibani. A destination very popular with celebrities is the Piccolo Pevero, the long half of its ‘big brother’. Then there are the delightful coves of the Romazzino bay. Poltu di li Cogghj was the Aga Khan’s favourite beach: it is known as the Prince’s Beach and is a stretch of fine sand divided by pink rocks. On the opposite side of the Costa Smeralda promontory you will be entranced by La Celvia, with fragments of shells and quartz powder, overlooking Cala di Volpe, a little harbour where scenes from ‘Agent 007- the spy who loved me’ were filmed. Further South, behold the spectacle of the most beautiful Costa Smeralda beach, Cala Capriccioli. The landscape is enriched by the little islands in the Arcipelago di La Maddalena National Park: Soffi, Camere and Mortorio. In the distance, you will see the shoreline of Liscia Ruja: coves lit by the white brushstrokes of sails. The largest beach is the scene, during the 15 August Ferragosto holiday, of a great celebration. Closing the coast, is the, evocative and secluded La Suareddha. Other masterpieces scattered throughout the 90 km of the Arzachena coast, include the ‘silky’ stretches of Tanca Manna and the splendid Ea Bianca (or Cove of the Junipers). Near La Sciumara there is Padula Saloni, a pond populated by herons, black-winged stilts and western marsh harriers and a bird watching destination.

Arzachena is not just sea and high society, but it has a fascinating past that made a permanent mark. In the old town centre there is the monti incappiddhatu (mountain with a hat), a rock known as the Mushroom, shaped over time in an original way and used since the Recent Neolithic Age. A walk in the countryside you will allow you to discover a vast archaeological park. The oldest and most famous site is the Li Muri necropolis (late 4th millennium BC), known as ‘grave circles’. Among the evidence of the Bronze Age, the nuraghe Albucciu, a ‘corridor-type’ building, hidden in a wild olive thicket. The remains of the village are around the nuraghe and 80 metres away there is the tomba Moru, the result of the transformation of an allée couverte into a Tomb of Giants. Nearby, you will find the little temple of Malchittu, the ‘theatre’ of ritual ceremonies. Not to be missed is La Prisgiona in the valley of Capichera, consisting of trilobed nuraghe and a village of approximately one hundred huts. To conclude the archaeological tour, there are two Tombs of Giants built in multiple phases between the Early and the Intermediate Bronze Age: the tomb of Coddu vecchiu with a four-metre high stele, and the famous tomb of Li Lolghi, made entirely from granite, with a long burial chamber and a long exedra, respectively 27 and 26 metres in length.

By day, you can relax in the Caribbean-like beaches of the Costa Smeralda and admire the captivating landscapes, after which you can abandon yourself to the most glamorous nightlife 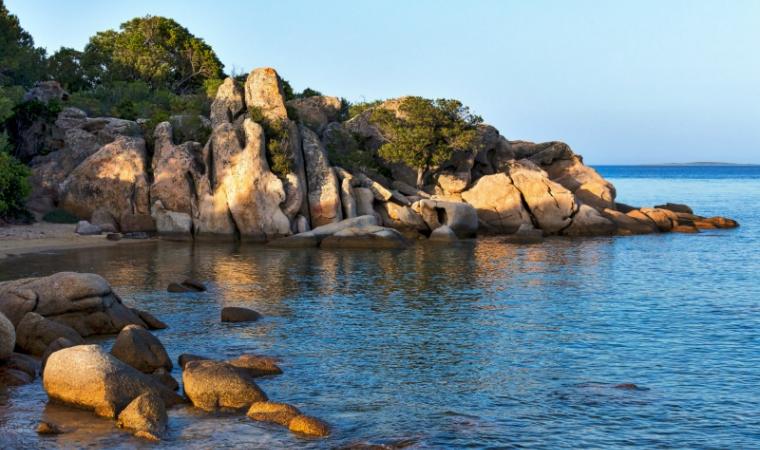 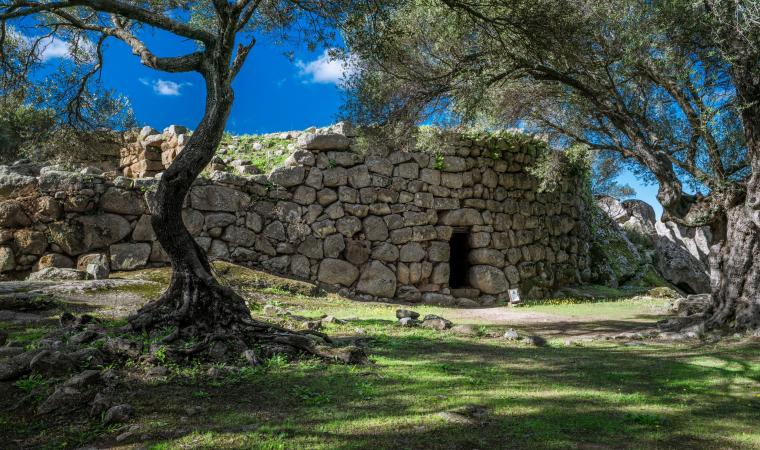 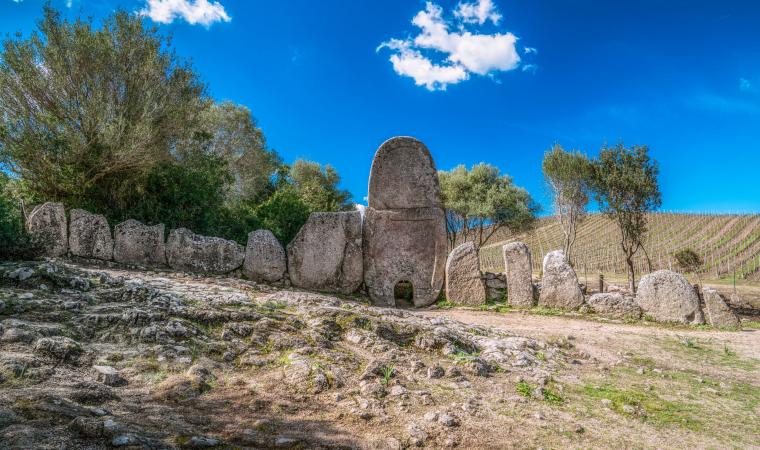 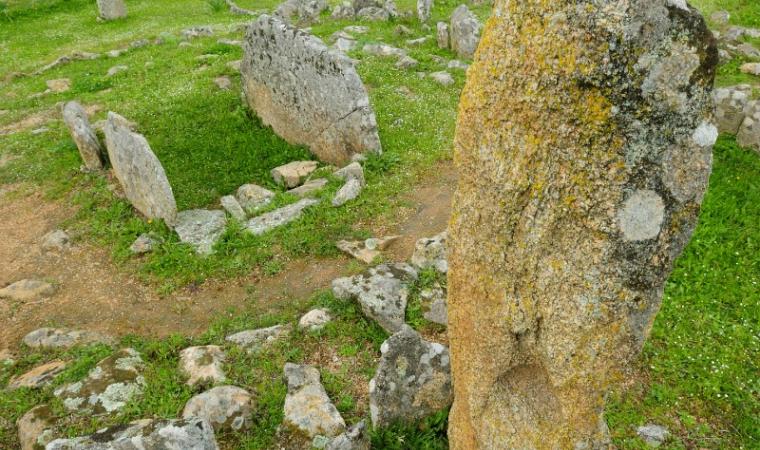 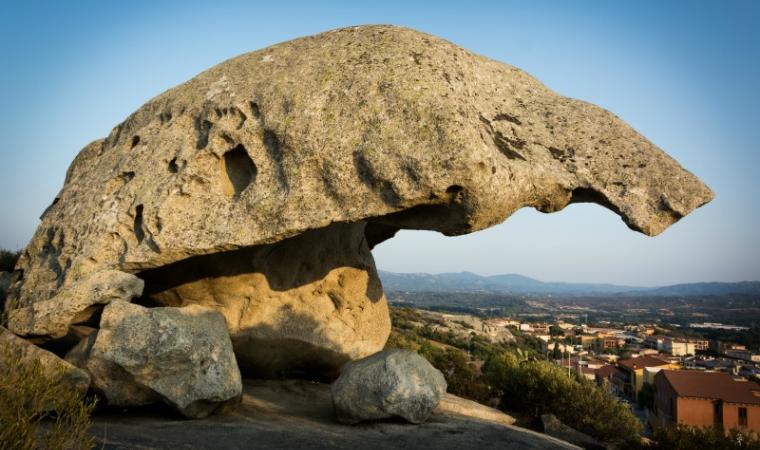 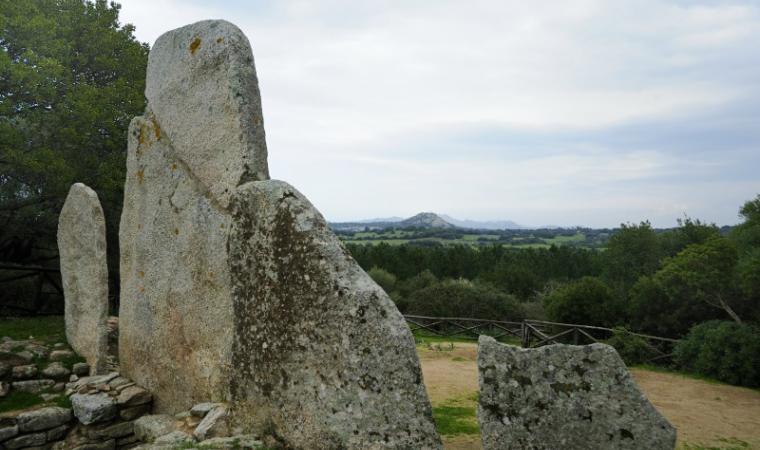 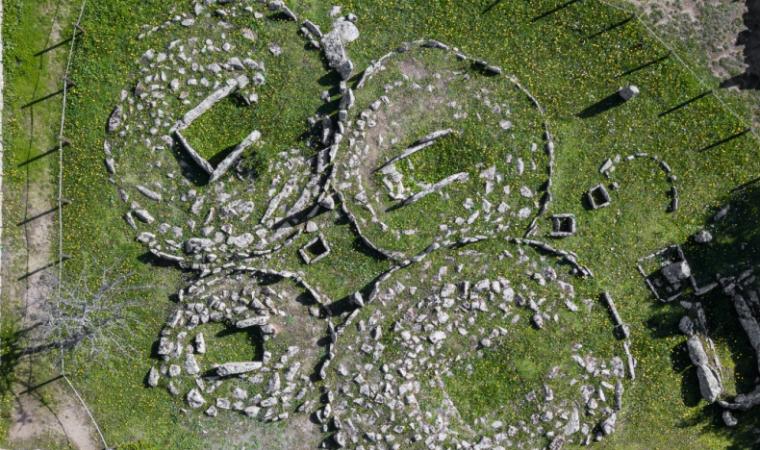 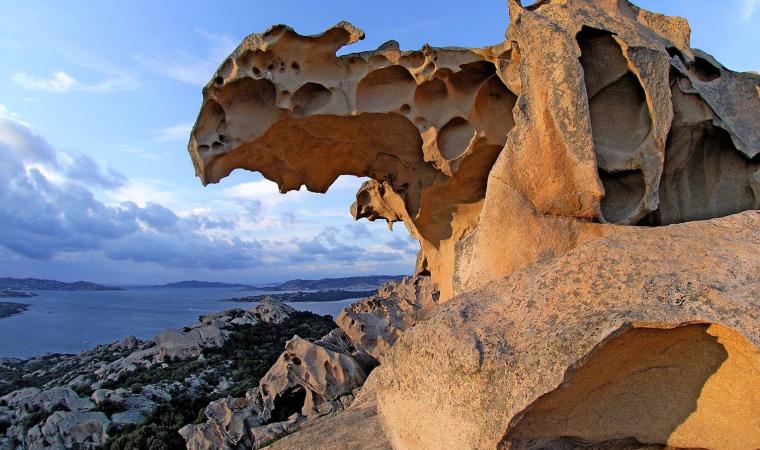 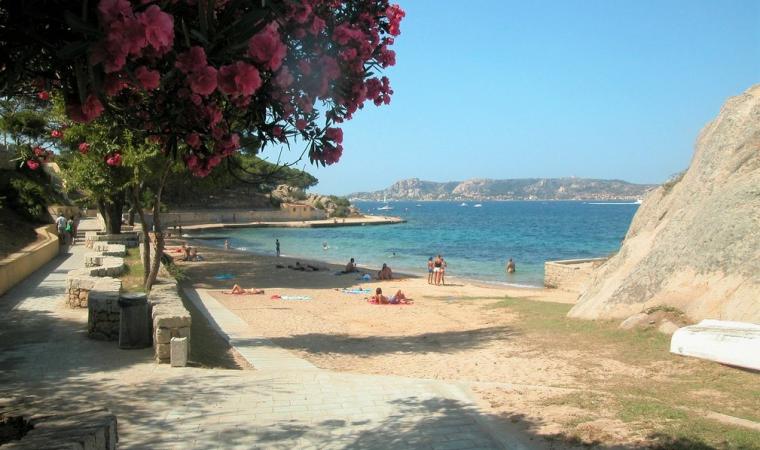 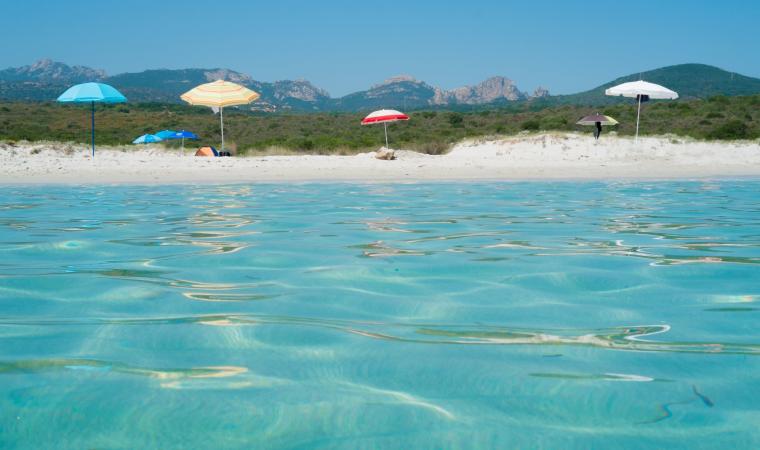 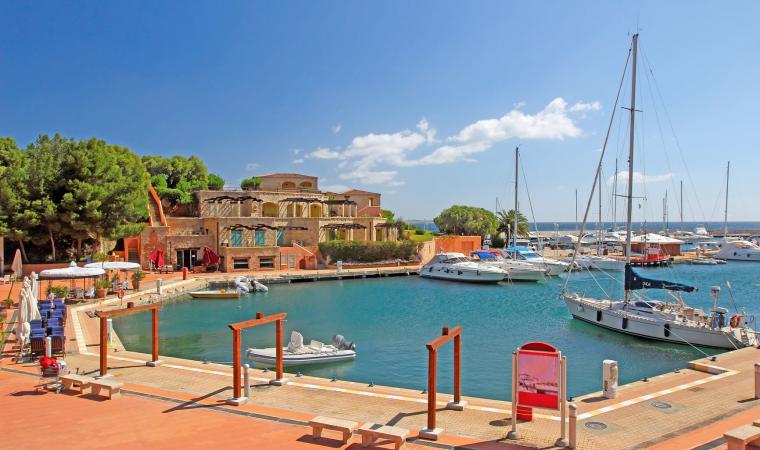 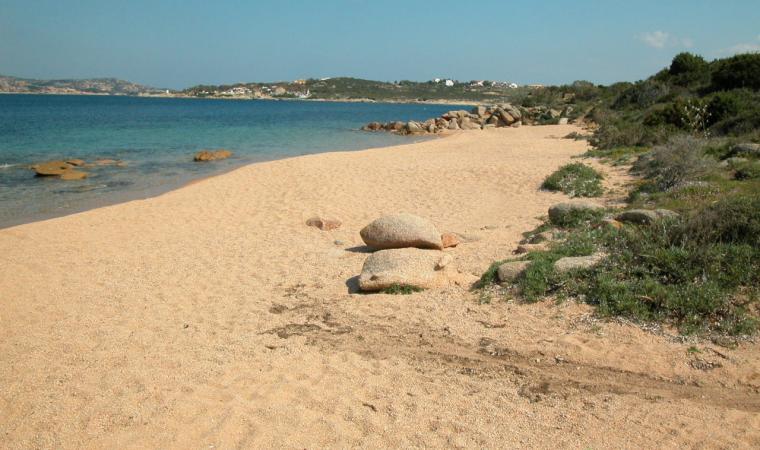