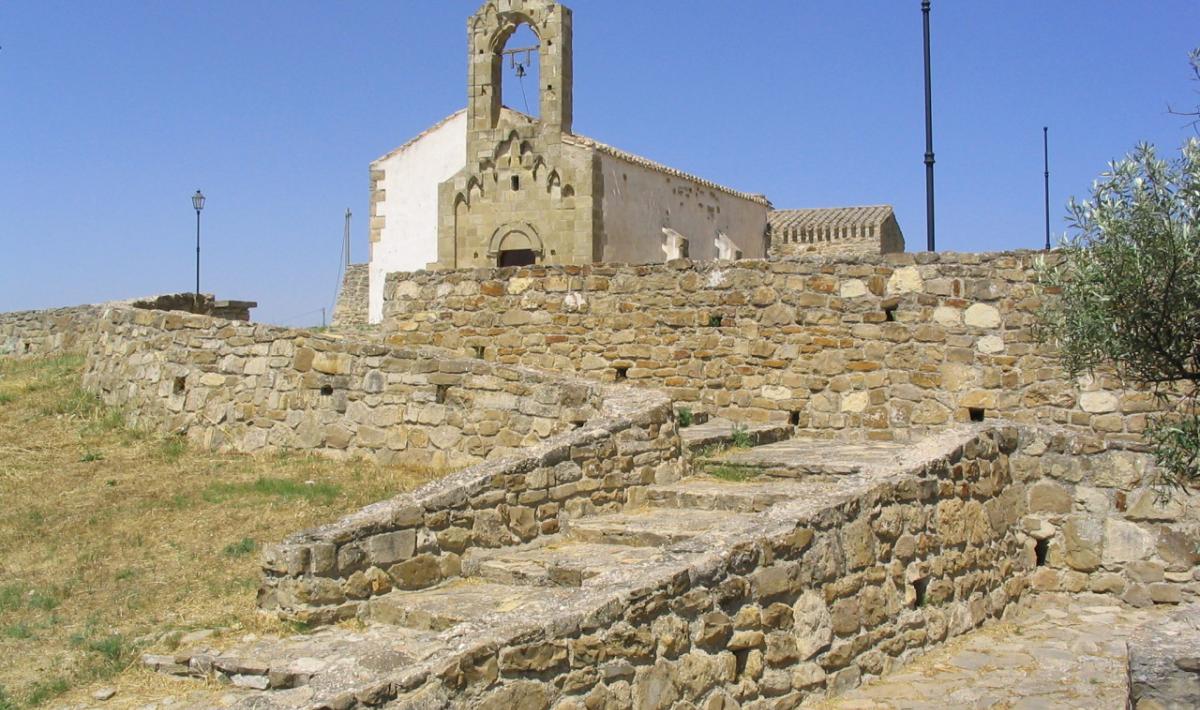 This is the oldest sanctuary of Senorbì, the main town in Trexenta, in central-southern Sardinia, which still retains features of the original Romanesque layout
© OpenStreetMap contributors

In the Middle Ages it was the church of Santa Maria, parish church of Segolay, after the disappearance of the villa of Trexenta; in the nineteenth century it was known, as well as Santa Mariedda (endearment of Mary), also as the church of San Nicola di Bari, according to 19th century historian Vittorio Angius. Nostra Signora della Neve, the oldest church in Senorbì, has almost a thousand years of history, not proven by documents but made up of reconstructions and confusion in the name. It was most likely built in the last quarter of the 13th century in Romanesque style with neatly arranged square sandstone blocks: the original structure appears to have had a semicircular apse and a single nave, covered with wooden trusses. It then underwent various restoration works, including reconstruction of the ceiling and expansion of the nave. A second construction phase is also clear from the use of un-squared and irregularly arranged stones. The present façade incorporates the original Romanesque one, and the division between the old and the new is marked by an ascending series of pointed arches. On the same vertical axis you will see the door and a large belfry, considerably larger than those of the original facade.

The church was parish church of the small village of Segolay, which is recorded since 1215 and located on a modest hill near the current outskirts of Senorbì. The surrounding area shows signs of settlement from the Nuragic Age until the end of the 17th century, through the Giudicato, Pisan, Aragonese and Spanish periods. The area was later incorporated into that of Senorbì, although a part was later claimed by Suelli. The cult of Our Lady of the Snow dates back to the 4th century under the papacy of Pope Liberius. The first temple dedicated to it is the Roman basilica of Santa Maria Maggiore (originally ad nives), from which devotion also spread to the island, where numerous sanctuaries arose in her honour. In Senorbì it is celebrated in early August. It is the most heartfelt festival together with that of Santa Vitalia, to whom the is Cuaddus de santa Vida is dedicated.

The religious framework of Senorbì, the main town of Trexenta, is completed by the parish church of Santa Barbara and the 17th century church of San Sebastiano. Various mansions embellish its historic centre: one 19th century villa hosts the archaeological museum sa Domu nosta. There you can admire remains from the pre-nuragic period, including the small idol of the Mediterranean Mother goddess, found in Turriga; the nuragic period, from the imposing on Nuraxi of Sisini village and from the nuraghes of Simieri and Monte Uda; and especially Punic items found in the settlement on Santu Teru hill (VI-III BC) and the associated necropolis of Monte Luna, consisting of 120 tombs, mostly in "well" form, some decorated. The rich funeral accessories confirm that the Carthaginian center was very flourishing. The area represented the most important town even in Roman times.

Discover a pretty little church of Romanesque origin, the only remains of a village that disappeared at the end of the 17th century and witness to the strong religious feeling in Senorbì