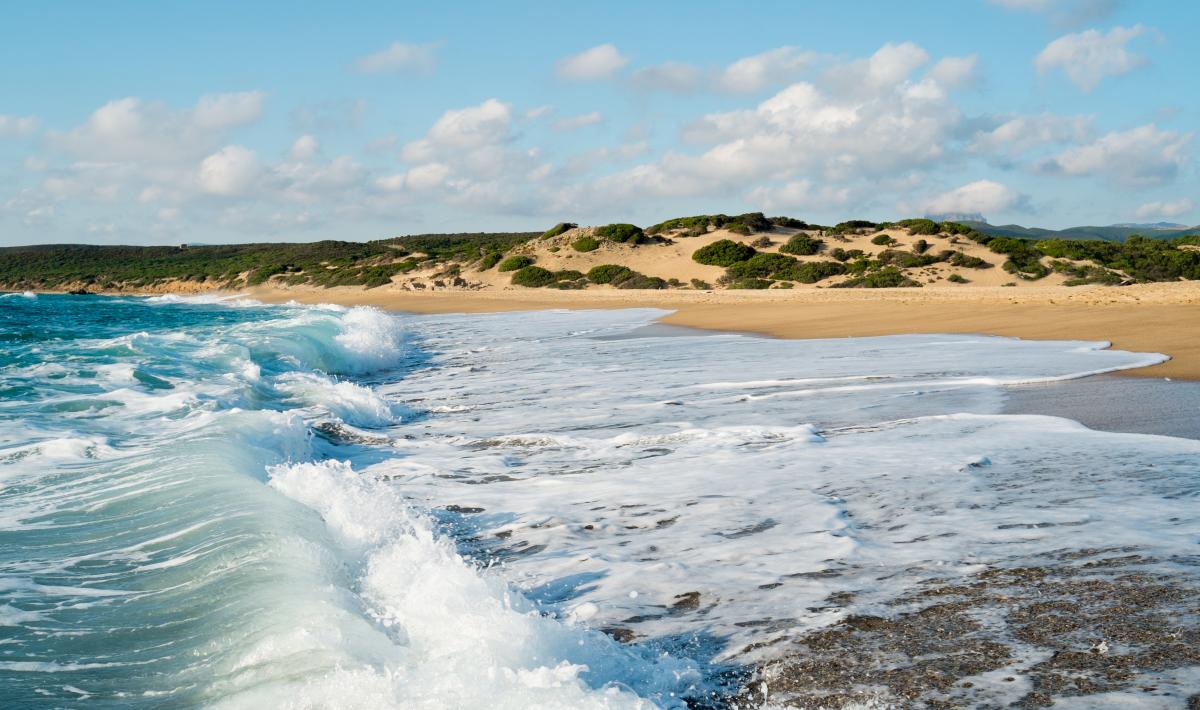 This 'pearl' of the Costa Verde, in south-western Sardinia, is a dazzling yellow-ochre desert, stirred by the wind and dotted with Mediterranean greenery
© OpenStreetMap contributors

This wonderful oasis far from everything, with imposing and sinuous dunes of fine, warm golden sand that reach up to 60 metres in height, is shaped by the mistral winds and extends several kilometres from the hinterland until diving into the boundless and shimmering blue sea. Piscinas, a jewel of the Costa Verde - in the territory of Arbus - is like an oriental painting, presenting a breath-taking landscape and a must-see beach on your island holiday, considered by National Geographic as being amongst the most beautiful in the world. After walking along the unpaved and sandy trails, you will suddenly spy the immense and deep golden expanse, extending seven kilometres. The sea and sky merge along the blue horizon, whilst the shimmering sand dunes - declared a World Heritage Site by UNESCO - blend with the colours of the Mediterranean scrub. The vegetation grows lush with centuries-old junipers bearing twisted branches, lentisks and olive trees that form small groves and, in spring, violets, sea lilies and sand poppies. Here, the Sardinian deer occasionally roams, whilst the sea turtles lay their eggs on the shore.

Its dimensions ensure a tranquil insulation at all times. Not surprisingly, a large stretch (around 800 metres) has officially been determined as the largest natural beach in Europe since 2018. The towns are located far away and there are few accommodation facilities aside from a campsite and a hotel close to the dunes. Along the sandy shore, you will find two panoramic kiosk-restaurants. You can also rent beach equipment, canoes, skates and dinghies. The parking area is also equipped for campers.

The clear seabed plunges to great depths almost immediately in a stepped formation. From a minimum of two to three metres, it soon reaches tens of metres. By diving, you can explore the site where the wreck of an English ship 'rested' for three centuries, 200 metres from the shore. The mouths of two streams attract fish close to the shore in the hunt for mullets. If you are a surf casting enthusiast, you will be pleased to discover that striped sea bream, shi drum and sea bream populate the waters. The wild sea of the Costa Verde is rarely calm and always to be respected. The constant wind raises long and high waves, making it a beloved destination for surfers, with windsurfing, kitesurfing and surfboarding enjoyed here even in winter.

Reaching Piscinas via Guspini or Arbus means undertaking a journey back through the centuries, imbued with memories of mining activities, as witnessed by the Rio Piscinas that takes on a reddish colour as it flows by. The road from Ingurtosu leads to the sea, through the valley of is Animas. The village, now a ghost town and part of the geomineral park of Sardinia, was the hub of nearby mining activities for over a century, belonging to the Montevecchio complex. With its Wild West atmosphere, you will see the remnants of mining settlements, including the residence of the director and the managerial building, church and hospital, the ruins of housing and the construction sites with wells, installations and washeries. The road descends steeply between mountains of scrap materials, rusty trolleys and abandoned wagons from the railroad once used to transport the minerals to the docks on the beach.

The dunes are characteristic of the entire Costa Verde. In addition to Piscinas, you can visit other “Saharan” environments sculpted by an exceptional sculptor - the relentless mistral wind. In Torre dei Corsari, a little further north, you will be dazzled by the mixture of the golden sand, the silver rocks, the turquoise and green of the sea and the vegetation. On Sabbie d’Oro of Pistis, the northernmost beach on the coast, the two kilometres of soft sand are surrounded by junipers, lentisks and olive trees. In Sivu, yet another jewel of the Mediterranean, you can admire three kilometres of dunes and turquoise sea, sensing a deafening silence, interrupted only by the undertow and the cries of seagulls. The beach is said 'talk' due to the echo that can be heard when walking along its extent. Another immense sandy expanse that also extends two kilometres in length, is the Marina di Arbus, with its melody of colours often leading to comments about being the “Caribbean of Sardinia”. Set between “Torre” and “Marina” are Portu Maga and Funtanazza, once a holiday destination for the miners' children. The extreme southern tip of the Arbus coast is Capo Pecora, a destination for scuba fishermen.

This is a magical and inimitable location, amongst the most beautiful and evocative in the Mediterranean - an expanse of golden sand contrasting with the emerald waters and vegetation sculpted by the wind 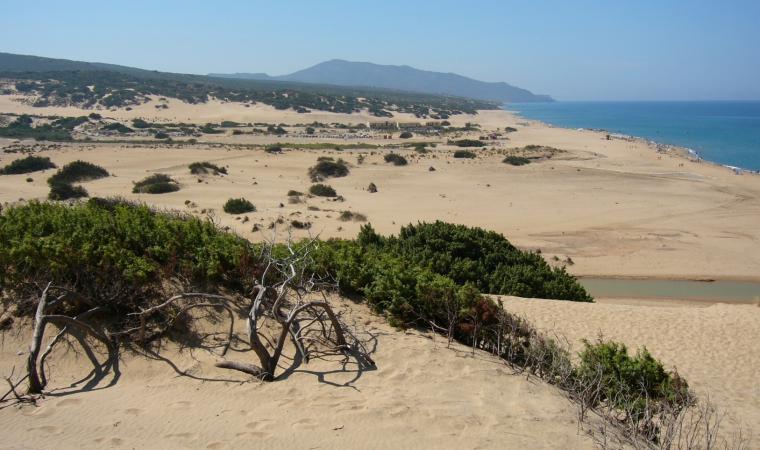 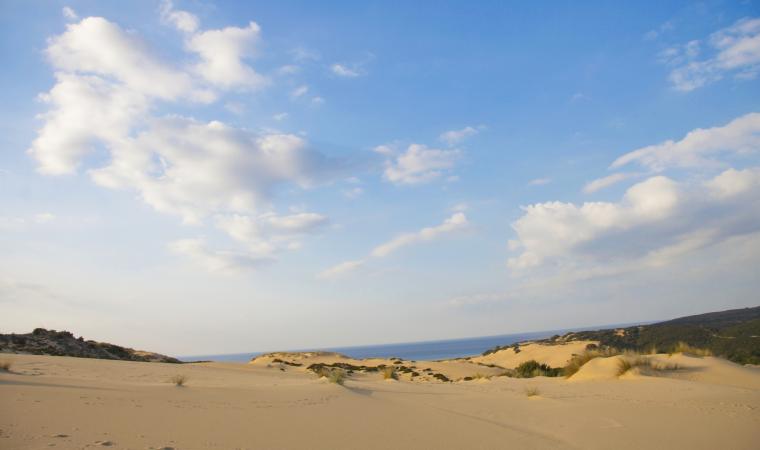 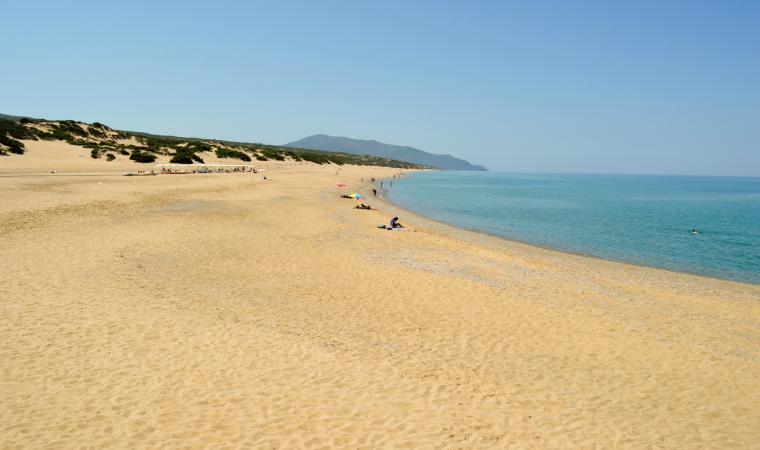 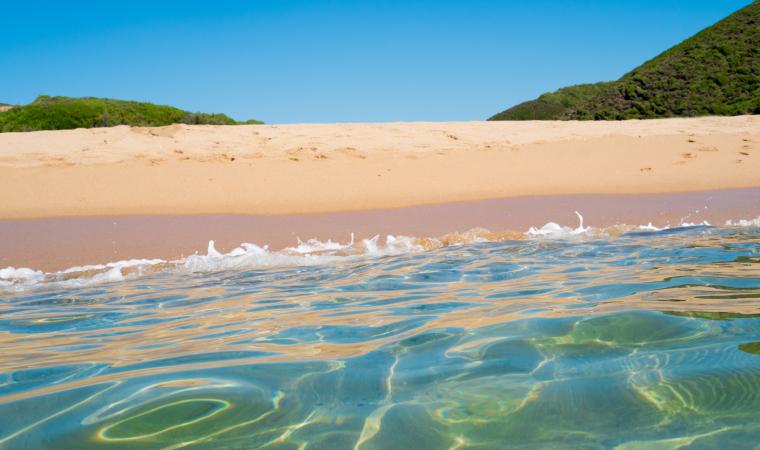 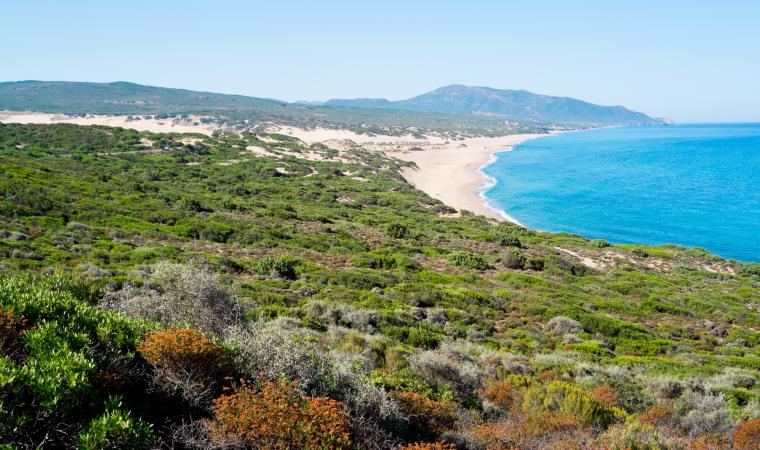 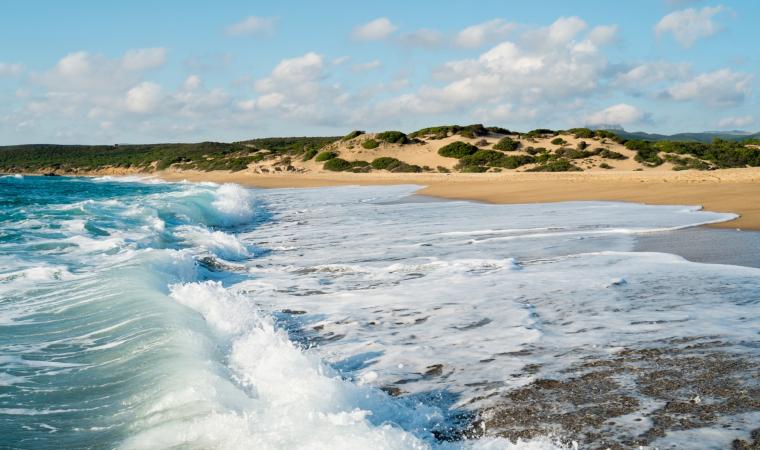 The beach is easily reached by going along the SP 126 provincial road towards Guspini: the beach is signposted and reached along a mountain road that passes along the mines of Montevecchio.