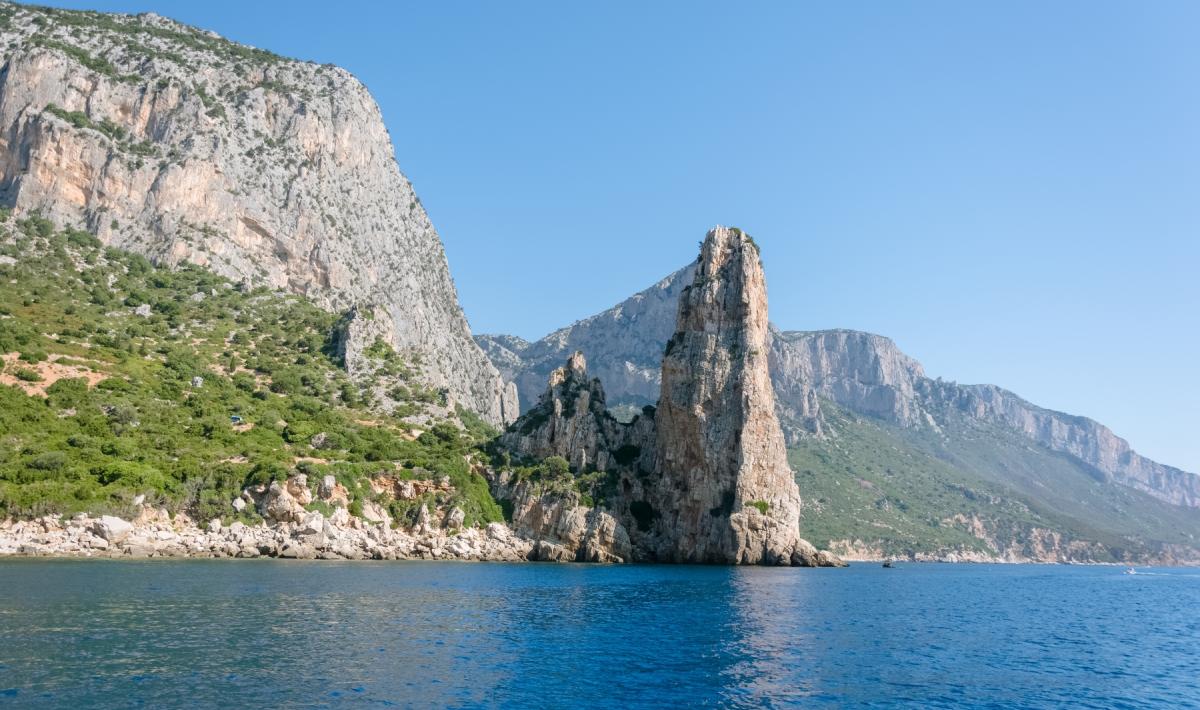 A tall limestone 'pyramid' rising from the sea, a natural monument on the Ogliastra coast of Baunei, in central-eastern Sardinia, a destination for hikers and climbers
© OpenStreetMap contributors

At first glance, it looks like a huge rock, but in reality it is a 'piece of mountain' that has fallen from the surrounding cliff, a link between the Gennargentu massif and the Gulf of Orosei. Pedra Longa is a calcareous-dolomitic block, an integral part (detached) of the vast Baunei plateau. Its 'spire' shape rises from the sea to a height of 128 metres: it is one of the highest rocky outcrops on the island, directly overlooking the sea, and was declared a natural monument in 1993. The original name is Aguglia or Agugliastra, from which Ogliastra is said to derive and which gives the idea of the shape enlarged at the bottom and slender at the top (‘aguglia’ means needlefish in Italian). This is what it was called in the past by mariners and was mentioned in pilot books because it was a reference point visible from many miles away.

The most fascinating way to discover it is along walking routes that descend from the cliffs to the coast. This is the starting point for the 'Selvaggio blu' (Wild blue), a week-long itinerary that leads from Santa Maria Navarrese, a coastal village in Baunei, to Cala Gonone, the most difficult trek in Italy, with 'alpine' stretches and stupendous scenery between rocks and sea. The first mini-stage arrives at Pedra Longa, an atmospheric approach and preparation for the much more demanding tests of the following days. During the four and a half kilometres of the route, Ogliastra is revealed in all its beauty: snap a photo on the terrace overlooking the sea, just before the destination. An easy path leads northwards from the Pedra, parallel to the coast, to the resort of Loppodine. Another more difficult route, with a considerable climb, leads behind the 'pietra lunga' ('long stone'), towards the north, where the punta Giradili peak rises majestically, the 'roof' of the gulf, standing at 700 metres plus and among the highest crags in the Mediterranean. The first climbing route on the Pedra, called 'luce senza memoria’ (‘light without memory'), dates back to 1981, a 250-metre-long crossing, two to ten metres above the water. The route, with difficulties up to V+, is free, with no pitons or ropes: experienced climbers can take it as they please. A second route on the south face, known as the ‘cromosomi corsari’ (‘pirate chromosomes’), is breathtakingly beautiful, but requires a great deal of caution and the accompaniment of guides.

Pedra Longa marks the start of the spectacular, wild Baunei coastline, one of the most striking stretches of the Mediterranean: 40 kilometres of limestone ramparts overlooking waters of shimmering hues, interrupted by coves of pebbles and furrowed by canyons that reach down to the sea, forming beaches of soft, white sand. La Pedra is its only point of interest that can be reached directly by car from a scenic road that joins it to the SS 125 (the Sardinian orientale): you will arrive at a rest area near the rock, with a bar-restaurant. At the base of the outcrop you can relax on a beach of pebbles and rocks. The seabed is characterised by rocky plateaus, which are popular with snorkellers, divers and underwater fishermen. Next to it are the Baus waterfalls, where, according to popular tales, the Saracens refuelled during their failed raid on Santa Maria Navarrese (mid-19th century). You can also visit the huge rock from the sea, on your own or as part of a guided tour with boats departing from the ports of Arbatax, Cala Gonone and Santa Maria.

Discover a spectacular cliff overlooking the sea, the starting point for wonderful hikes and a place for climbers, marking the start of the unparalleled Gulf of Orosei

The beach is reached along the panoramic SS 125 main road: then, after Baunei towards Tortolì there is an asphalted road to the left with signposts for the beach.

Bar
Restaurant
Servizi igienici
Do you like this place?
Santa Maria Navarrese
could be your ideal destination.