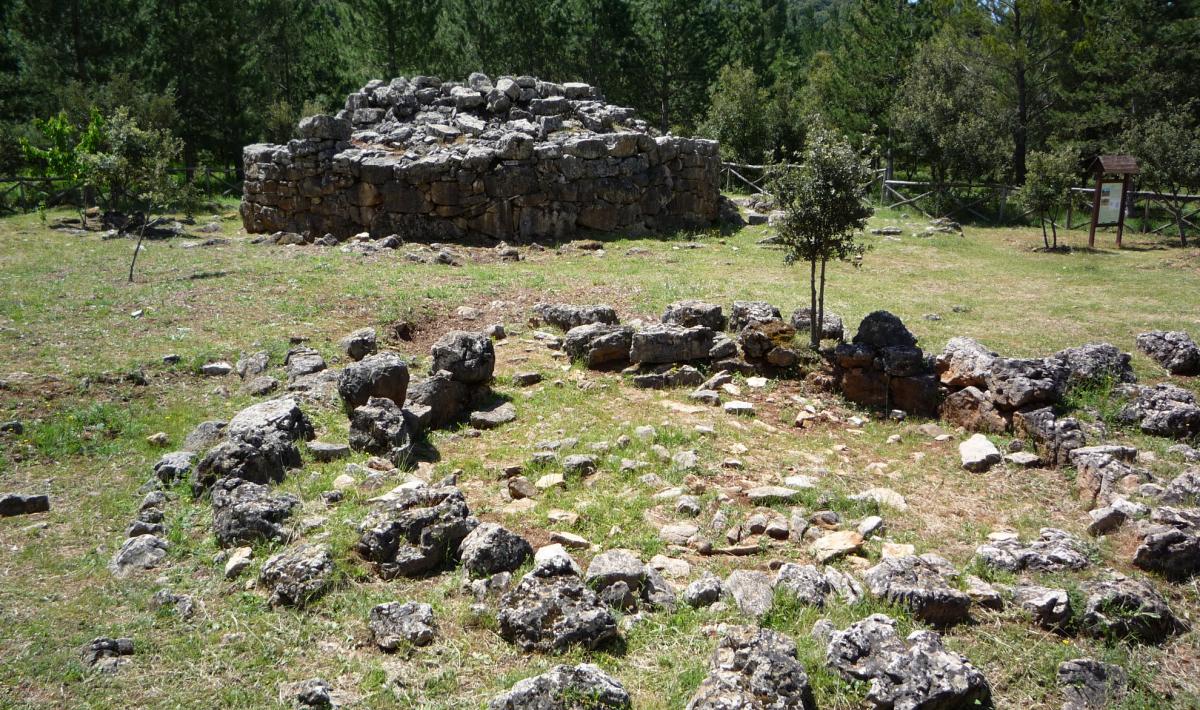 A vast and lush green area in midst of Ogliastra in central-eastern Sardinia, it contains a series of interesting remnants from the Nuragic civilisation

Embellishing the Valle di Truculu are two almost-identical nuraghe megalithic edifices that date back around 3,500 years – the Orruttu and Sanu that rise up majestically, two kilometres from each other. Perhaps, together with a settlement and two megalithic tombs, they constituted a fortified palace on the Osini plateau, in the centre of Ogliastra, also renowned for the imposing and beautiful complex of the Serbissi nuraghe. Departing from the village, one reaches the valley passing the Scala di San Giorgio, a narrow passage dominated by the Castello, a rocky peak that was perhaps once a fortified Roman-Byzantine residence. After the ridge, about four kilometres from the village, is a lush green area replete with remnants from the Nuragic civilisation. At the heart of the valley stands the Orruttu nuraghe. The structure is a lone tower, covered with a tholos (a faux dome) and comprised of large, well-squared blocks of limestone. At its base, the diameter reaches 12 metres, whilst the remaining height today reaches four and a half metres. A trapezoidal-shaped entrance leads to an internal room, where there are two niches and a staircase. Completing the scene are the remains of a circular hut with a rectangular atrium next to the tower. The massive structure was frequented from the middle of the Bronze Age to more recent times (1600-900 BC). Towards the end of the valley, the Sanu nuraghe rises up, the ‘giant’ of the archaeological area. The layout is identical: a lone tower with a vaulted tholos chamber, which today reaches six metres and has a diameter of twelve and a half metres. It is practically the ‘twin’ of the Orruttu. To be admired is the curated walling work, comprised of well-hewn blocks and horizontal rows. Placed at regular intervals, the blocks help to enhance the slender silhouette. Excavations revealed a niche and a staircase, as well as various bronze rings in an open circle, with a thin circular rod and pointed ends. The Sanu was also frequented throughout the same extensive period as the Orruttu, with a succession of uses. The dimensions express grandiosity and, considering the imposing diameter, both had to have originally been quite tall. A few dozen metres from the Sanu, two Giants’ tombs can be admired. The burials, used in the Bronze Age, were frequented once more during the historical age. Their layout is that of the head of a bull, an animal deified by the Nuragic peoples. The rectangular apsidal funeral chamber intended for interment rituals is the head, the semi-circular space before it (exedra) are the horns. In Tomb A, part of the exedra can be seen. On the right-hand side, there are five slabs affixed to the ground, a single large block on the left side, which serves as a jamb for the entrance. The rectangular chamber is almost ten metres in length and less than one metre wide. In Tomb B, the exedra is represented by three blocks on the left side and four on the right.

Following a splendid itinerary through the Osini plateau, passing natural and historical monuments, one comes across a valley in which a Nuraghic palace stands to this day 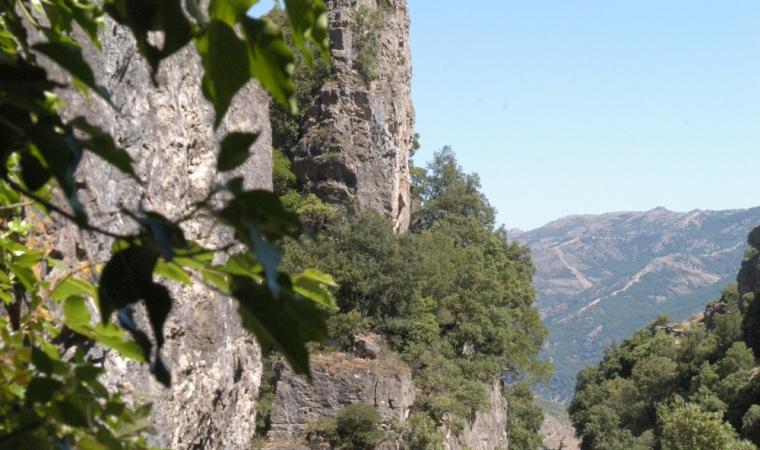 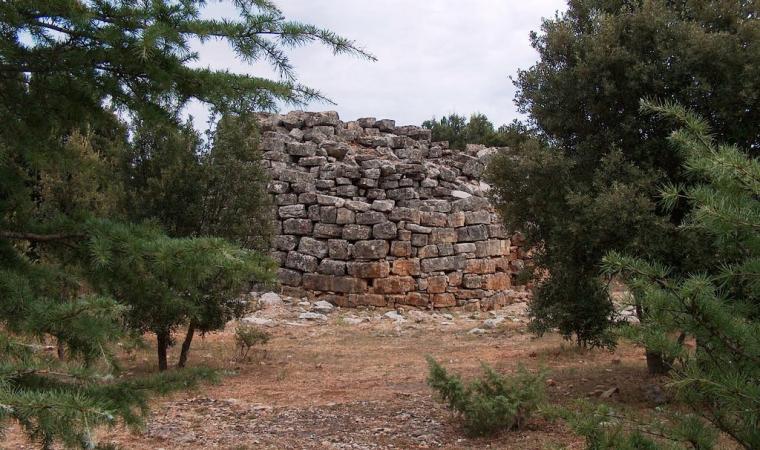 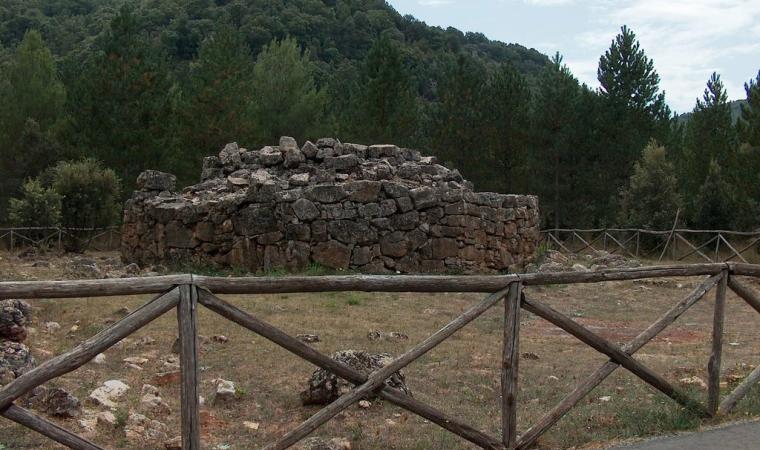 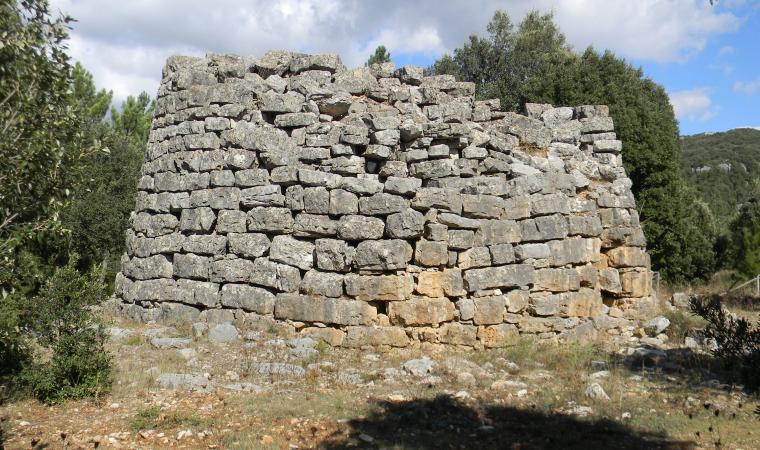 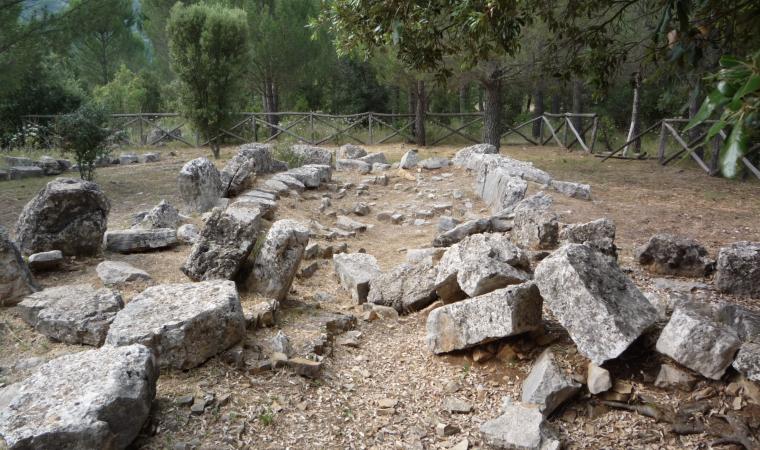