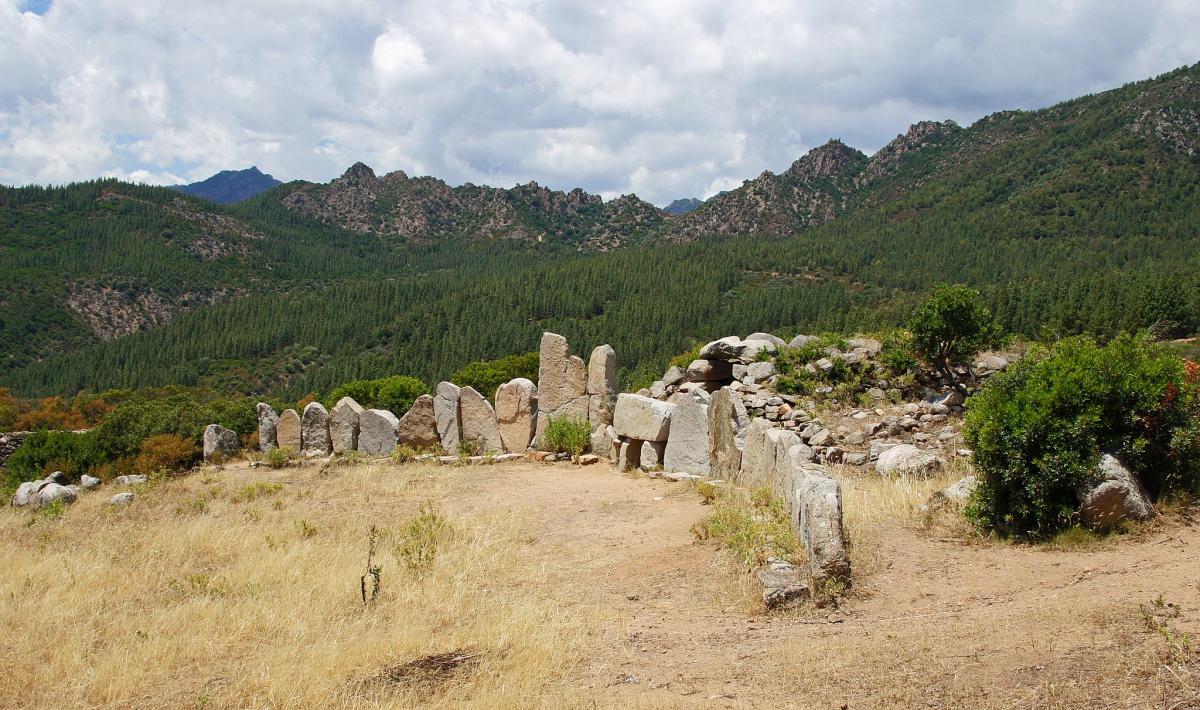 A small town in the centre of the Ogliastra region near Baunei in east-central Sardinia, famous for its lovely landscape, ancient traditions, prehistoric remains and cuisine
© OpenStreetMap contributors

The panorama over the landscape around town is one of alternating plains and hills covered in woods of oak trees, cork, carob and Mediterranean brush that are home to martens and mountain goats, to eagles and falcons. Triei boasts some 1,200 inhabitants in the north-eastern part of Ogliastra and its name comes from tereiu: in spring the countryside is covered in a fragrant coat of intense yellow Spanish broom, known in local dialect as terìa. The economy is based on agriculture and grapes, from which quality cannonau wine is made. The area is renowned for the fine honey made by local beekeepers, especially the slightly tart arbutus honey. Local cuisine uses genuine products and ancient recipes to make culurgiones, macarrones de busa, pistoccuincasau, istacculas with myrtle, roast lamb, goat and pork. Among the crafts are rugs and bedspreads made on hand looms, wicker baskets, and arresojas made of bone.

First mention of the town in an official document dates to 1316. Another town in the same place was mentioned in a document from the previous century, but it was abandoned. It had been on the Osono plain, very near Triei. The nearby imposing Giant tomb is still there, a burial chamber of some 20 metres in length, brought to light in its entirety in 1989. The exedra is made up of twelve boulders set in the ground and an entrance with architrave. The digs uncovered artefacts dating from the Nuragic Age to the Roman Imperial Era. The entire area is dotted with Nuragic remains: Figu, Fratta, Nonnùccoli, Pizzu‘e Serra and, above all, just 2 km from town, the five-lobed nuraghe known as Bau Nuraxi, made with boulders of granite. It has a central tower and two side ones, a vast wall that encompasses another four towers and surrounds the complex.

The town itself is an open-air museum thanks to Arte a Triei, an event that takes place in May when the walls of houses, streets and the squares of the oldest parts of town are covered in murals by artists from all over the world. At the centre of town is the church of Santi Cosma and Damiano (XVI-XVII century), home to an extraordinary artistic heritage: frescoes depicting scenes from the lives of the saints and the Old Testament dating to the XVIII century and attributed to the Are school of Nuoro. The patron saints are celebrated late September, while Sant’Antonio of Padua has his feast day on the 10th of August at the charming Mullò park, four kilometres out of town and set among ages-old mastic trees. The bonfires for Sant’Antonio Abate are lit mid-January, when people gather around to enjoy such local treats as sa paniscedda. In May there is the procession for San Sebastiano, featuring decorated bulls pulling rustic carts, and s’Orroseri, the feast of the Maddona of the Rosary when sa simbula, local bread, is blessed and distributed. Santa Lucia is celebrated on 13 December with isbagadius, or “the bachelors.” In Ardali, once a populous outskirt that is now home to only 100 people, is the XX century church of San Pietro, which took the place of one of the area’s oldest churches, whose bell tower can still be seen.

You will visit one of the Ogliastra’s loveliest towns, a place of wholesome food and longevity, surrounded by pristine nature, traditional culture and prehistoric remains