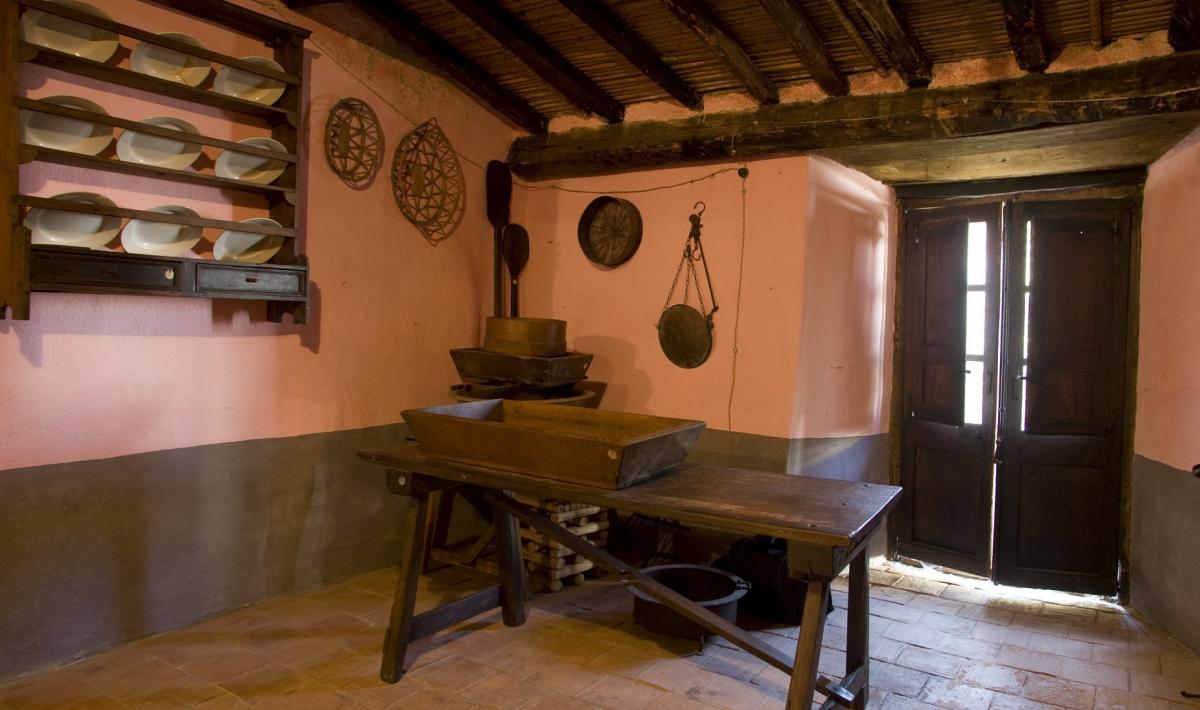 The route that in the village of Seui leads from the Palazzina Liberty to the Carcere spagnolo is in itself fascinating, passing through an ancient underpass called su Porci, consisting of stone houses, with wrought iron balconies and carved wood doors.

The prison, built in the first half of the 17th century, is surrounded by tall houses, which hide it from view. The building has a square floor plan and two storeys, each with a separate entrance, plus a partial attic, known as su staulu farzu.

The building, divided into two parts, preserves various pieces of 19th century furniture, in the prison officers' quarter, in the kitchen and in the three cells, respectively the women's, men's and solitary confinement cells. The kitchen, reconstructed and furnished with all the utensils of the time, has a fireplace built in 1910 which features two masonry burners, replacing the traditional fireplace known as su fogili, which had no fume hood. The floor of the women's cell is made of chestnut wood beams and planks, serving also as ceiling for the room below it, the solitary confinement cell known as sa cella de su pei in tipu. This latter cell is narrow, with a tamped earth floor and has no window, here prisoners were subjected to tortures. The visit is completed by the section displaying documents on the inmates' transfer from the Seui prison to other facilities, at times in carriages pulled by several horses, less often in a horse-drawn omnibus. However, most of the transfers were made on foot, with armed guards. Once the railway reached Seui in April 1894, many transfers began to be made by train.

This museum provides a unique glimpse into the tragic living conditions of convicts at a time when the police and judicial systems on the island were still in the hands of feudal lords. The museum also preserves interesting evidence on the medical care provided to the convicts and on the potions and remedies prepared and supplied by the local pharmacist on behalf of the town's government.

The list of herbs and plants is especially interesting as it sheds light not only on the inmates' lives but also on that of the whole village, as those same remedies could be given to the townsfolk in need. The town's coffers bore the cost of these treatments both for the convicts and for the poorest villagers.

© OpenStreetMap contributors
Do you like this place?
Barbagia
could be your ideal destination.