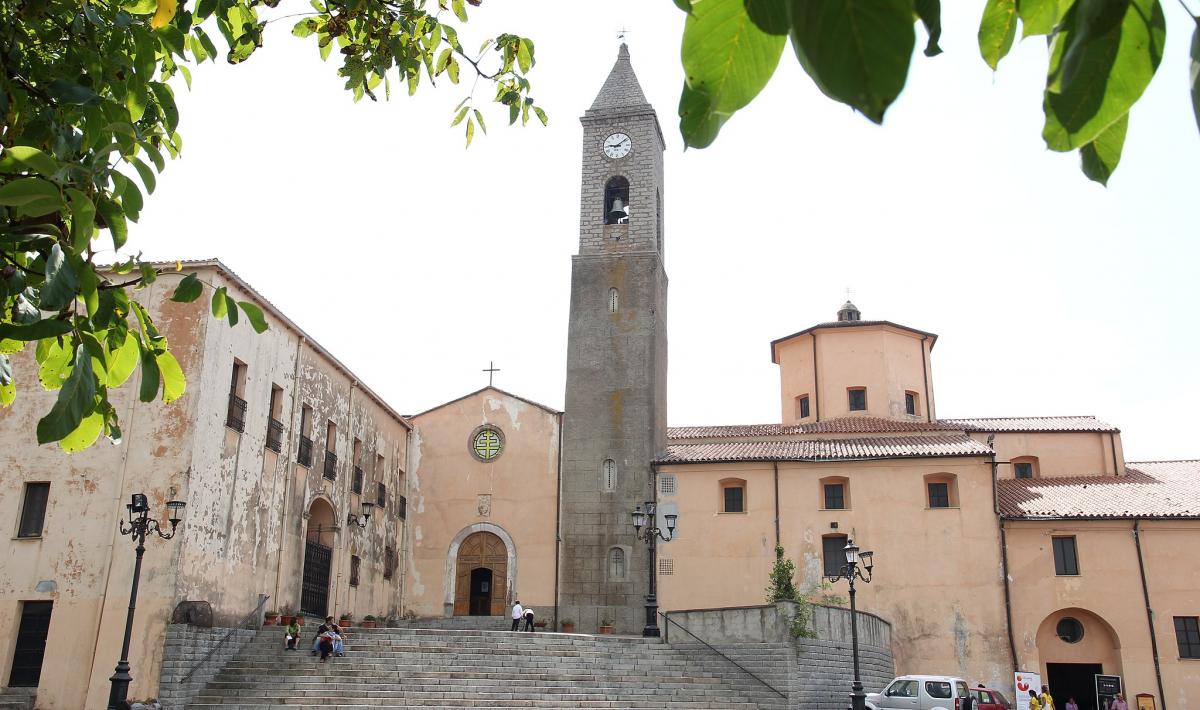 In the centre of Sardinia, in the highest village of the island, there is a sacred architectural complex considered one of the most illustrious examples of Baroque and Rococo art
© OpenStreetMap contributors

The Franciscans settled in Barbagia at the beginning of the 17th century in the Logotza district , the southern part of the current town of Fonni , a village set about a thousand meters above sea level. On lands donated to them in 1610 by benefactor Stefano Melis, they built a church and convent dedicated to the Trinità. Both had typically Franciscan, very simple architecture: the first with a single, barrel-vaulted nave with three chapels on each side; the second with a well in the centre surrounded by a quadrilateral cloister. In 1702 on the initiative of Father Pacifico Guiso, the friars began work on a new sanctuary, grafted onto the pre-existing church and dedicated to the Vergine dei Martiri. The ambitious project, which provided for an upper sanctuary and an underlying crypt, was entrusted to Milanese stonemasons and workers (and was completed four years later). To them we owe the floral and exuberant artistic language, then in vogue in the European capitals.

The upper basilica has a single nave with a barrel-vaulted ceiling, onto which two semi-circular chapels open. The building concludes with a raised presbytery that houses the altar with the venerated simulacrum of the Vergine dei Martiri, which tradition recounts was made with the dust of bones found in the Roman catacombs of Lucina. The church is topped by an octagonal dome, while its sumptuous sculptural decoration is enriched by the paintings of Pietro Antonio Are and his son Gregorio. Equally sumptuous is the underground sanctuary, the crypt of Sant'Efisio and San Gregorio Magno, considered fathers of the faith in Barbagia. It is divided into two rooms, both rectangular and barrel-vaulted: in the vestibule five niches on each side host effigies of saints linked to the Franciscan tradition; in the sanctuary itself you can admire the luxuriant polychrome stucco decoration and Are's tempera works on the vault. The complex also includes the oratory of San Michele Arcangelo, built in 1759, also in rococo style, based on Lombardian models, the convent, which preserves a precious collection of 16th and 18th century paintings, and the Franciscan hospitality oasis. All the buildings, still officiated by the minor friars today, face onto a large square bordered by cumbessias , former dwellings intended for novices and pilgrims during religious holidays, including the festival of the Madonna dei Martiri at the beginning of June, by far the most popular in Fonni. During the procession, the sound of the evocative gosos (sacred songs in Sardinian), gaudy traditional feminine dresses and the knights of s’Istangiatu - protagonists of other religious festivals and the Palio of the Municipalities, at the beginning of August - accompany the statue of the Virgin. The festival has its roots in the 17th century, during the Spanish colonization, while the church of San Cristoforo, in the countryside, and the destroyed one of San Michele, remain from the Byzantine era.

The hub of Franciscan hospitality and worship in Barbagia, a large and sumptuous sacred complex, a place of meditation and the location of Fonni's most popular festival