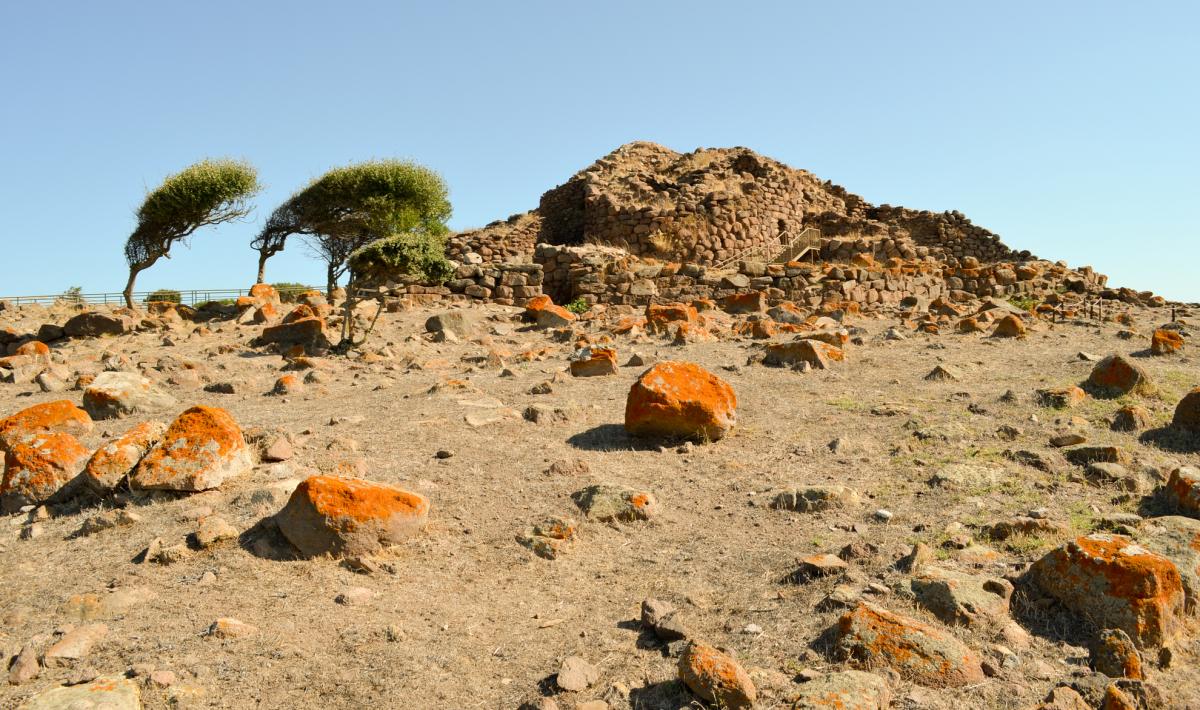 One of the largest and most particular Nuragic complexes lies in the territory of Gonnesa, in the centre of the Iglesiente sub-region in the south-western tip of Sardinia
© OpenStreetMap contributors

This vast monument perfectly documents the architectural capacity and social and spiritual life of the Nuragic civilisation. The Seruci complex extends across six hectares in the territory of Gonnesa, and consists of complex Nuraghe, a bulwark, an extensive village of huts and a Tomb of Giants. It is reached via the welcoming subdivision of Iglesiente, which is about six kilometres, along the Provincial Road 82 towards Portoscuso. It was certainly a complex Nuraghe, penta- or hexalobate, whose construction presumably began at the end of the 14th century B.C., in the recent Bronze Age, and whose life lasted until the 10th century B.C., in the final Bronze Age. The central tower (keep) with a projecting dome was originally composed of three superimposed cells. The keep, with a diameter at the base of about 60 metres (!), rises up around 15 metres to stand out on a relief, and is still surrounded by a bulwark of five (or six) towers, some of which are still in good condition. Their summits must have been crowned by stone battlements, recovered at the base of the structures during excavation works, which began with the discovery in 1897 and carried out by Antonio Taramelli (1917), to then be resumed at the end of the 20th century and continued at the beginning of the 21st century, until a very recent restoration. Inside the tower are several cells to be visited, the floors of which were perhaps lined with cork to ‘isolate’ the chambers. In a cell on the first floor, topped with a dome, you can see and touch the totemic foundation stone - a polished axe head inserted between the stones of the mural. Every interstice between one ashlar and the next hides secrets. At the northern exit of the temple is a large ablution basin, which collects water from a well-covered in stone, with a depth of around ten metres. Before a spectacular tiered theatre where the villagers attended and participated in the water rituals and worship of the Mother goddess. Being the largest, this was likely the ‘gathering hut’, probably used by the community as a space in which to unite, to discuss decisions to be taken for the village, which extends over the slopes on which the Nuraghe stands. Dating back to the Final Bronze Age, it is one of the largest Nuragic ‘quarters’ in Sardinia with over one hundred circular huts divided into six blocks. The residential ‘agglomerations’ are of similar dimensions and have the same ‘ring’ system, being distinct but interconnected by streets, arranged in groups. In some of them, you can see the utilisation of rare architectural solutions - the remains of small internal partition walls and additional rooms of various shapes, connected to the regular housing. A block consisting of 14 rooms arranged around a central courtyard was been excavated and studied, being the typical residential structure of the last Nuragic era. In the middle of the village is a piazza that is the hub of commercial exchange. In addition to the gathering hut, there is the temple, where the remains of ritual sacrifices were found, the sacred hearth and the ‘thermal waters hut’ with the central basin full of water, into which hot stones were immersed to release the steam. From the circular seats around, perhaps the ‘sweat ritual’ was practised.

Climbing the hill overlooking the complex, you come to a Tomb of Giants, a burial place for the village. From the position of the Nuraghe, you can see the entire territory in the surrounds, including two other contemporary settlements, the Nuraghi sa Turrita and Gennerei, with which the Seruci must have been in connection.

Take a fascinating ‘dive’ back 3,500 years to discover majestic monuments, the life and the customs of the Nuragic civilisation in its advanced stages